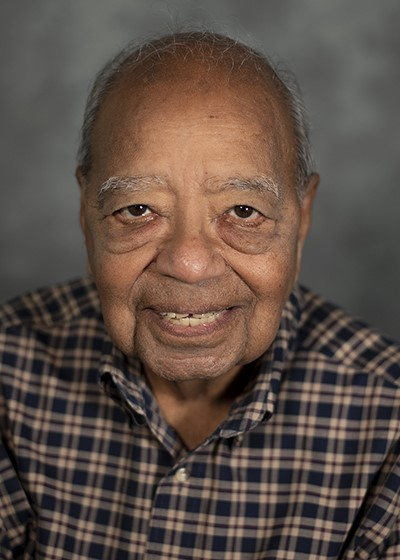 Dr. Raja V. Ramani is currently Emeritus Professor of Mining and Geo-Environmental Engineering at The Pennsylvania State University and Emeritus George H. Jr., and Anne B. Deike Chair in Mining Engineering. His current activities include teaching, research, consulting and service to the worldwide mineral industry through his academic and professional affiliations.

Dr. Ramani joined Penn State in 1966 as a graduate research assistant and obtained his M.S. (1968) and Ph.D. (1970) degrees in mining engineering.  He was appointed Assistant Professor in 1970 and promoted to Associate and Full Professor in 1974 and 1978, respectively.  He was the chairman of the Mineral Engineering Management Section from 1974 to 2001.  From 1987 to 1998, he was the Head of the Department of Mineral Engineering during which time the Geo-Environmental Engineering (1992) and the Industrial Health and Safety (1996) undergraduate majors were created in the Department.  The Department was already home of the Mining Engineering, Petroleum and Natural Gas Engineering, Mineral Processing, and Mineral Engineering Management programs.  In 1998, he was appointed to the first endowed chair in the College of Earth and Mineral Sciences, the George H., Jr. and Anne B. Deike Chair in Mining Engineering. In 2005, Dr. Ramani was elected to the National Academy of Engineering.

Dr. Ramani, a graduate of the Indian School of Mines (AISM, Mining Engineering, 1962), obtained a B.Sc. (Hons,) in Mining Engineering in 1962 from Ranchi University with first-class honors.  During 1962-66, he was a graduate engineer, ventilation officer, safety officer, and mine manager in the underground coal mines of Bengal Coal Co., Andrew Yule & Co, now, Coal India, Ltd.  He is a certified first-class Mine Manager (1965) under the Indian Mines Act of 1952, a registered professional engineer (1971) in the Commonwealth of Pennsylvania, and a Certified Mine Safety Professional (2001 - 2006).  Dr. Ramani was the Co-Director of three research centers --- Generic Mineral Technology Center on Respirable Dust (1983-98), National Mined-Land Reclamation Research Center (1983-98) and   the Standard Oil Center of Excellence in Longwall Mining (1983-89).  Between 1992 and 2001, he was the Director of the Penn State Miner Training Program during which time he developed a special emphasis on small mines safety.

Dr. Ramani has directed over 100 graduate students from 25 countries for graduate degrees, published over 200 research papers, co-authored an authoritative text on mine ventilation and air-conditioning, and contributed to 25 books, handbooks and encyclopedias.  He has edited the proceedings of 15 national and international symposiums.  Dr. Ramani's research has also resulted in over 125 research reports to the sponsoring agencies.  Six of his graduate students have won the annual Society of Mining Engineers’ [SME] Graduate Student Paper Contest.  Over 10 of his former students hold leadership positions in academic institutions around the globe.

Dr. Ramani's experience in mineral extension education has spanned over 45 years.  The experience includes planning, developing, directing, and conducting short courses for industry people at university settings, in the US and abroad, special programs at corporate headquarters, training sessions at equipment manufacturers, seminars to government researchers, and special seminars at international meetings.  He has developed, organized and taught over 20 continuing education programs.  He continues to direct and teach the annual SME Professional Registration Short Course for Mineral Engineers which he developed in 2002.

Dr. Ramani joined the Society of Mining Engineers, Inc. of the American Institute of Mining, Metallurgical and Petroleum Engineers (SME-AIME) as a student member in 1966.  Since 1970, he has served on over 40 SME and AIME committees.  He was the chairman of the Coal Division in 1987 and was a member of the Board of Directors of the Society (1987-91; 1994-97).  Dr. Ramani was the 1995 President of SME.  He has served on the AIME board of Trustees (1994-97), and the Board of Trustees of the SME Foundation (SMEF) (1993-96, 1997-2017).  He was the treasurer (1997-2000) and the President of SME Foundation (2001-2004).  Dr. Ramani is active in a number of other professional societies.  He was the Chairman of the Minerals Engineering Division of the American Society for Engineering Education (1978).  He was a member of the International Council for the Application of Computers in the Mineral Industries (APCOM) from 1974 to 2002.  He was the Chairman of the Council from 1983 to 1987.  He is a fellow of the Mine Ventilation Society of South Africa (1975); the Mining, Geological and Metallurgical Institute of India (1984); and the Institute for Operations Research and Management Sciences (1970).  He is a life member of the Honor Society of Phi Kappa Phi and the American Society for Surface Mining and Reclamation (1976).  He has served as the Chairman of the Earth Resources Engineering Section (Section 11) of the National Academy of Engineering and on the committee that worked on the “Global Challenges in Earth Resources Engineering.”  At Penn State, SME and SMEF, he is active in fund raising campaigns for such causes as scholarships, graduate fellowships, professorships and other worthwhile causes.

Dr. Ramani has served on a number of advisory committees at the international, national and state levels.  He was the chairman of the Post-Disaster Survival and Rescue Research Committee of the National Academy of Sciences (1979-81).  He was a member of the U.S. Department of Labor's Belt Air Advisory Committee (1992-93) and the Secretary of Labor’s Dust Advisory Committee (1995-96).  He served on the U.S. Department of Health and Human Service's Mine Health Research Advisory Committee (1991-98) to which he was appointed by the Secretary in 1991.  He has served on a number of technical and advisory committees for the Bureau of Deep Mine Safety (Pennsylvania's Department of Environmental Resources) and Pennsylvania Energy Development Authority (PEDA).  He was a member of US National Academy of Sciences Health Research Panel of the NAS Committee on the Research programs of the U.S. Bureau of Mines (1994), and the NAS Committee on Technologies for the Mining Industry (2000-01), the NAS Committee on Coal Waste for Impoundments (2001-02), and the NAS/IOM Committee on NIOSH Programs (2005-10).  Dr. Ramani chaired the NAS Committee on the Evaluation of NIOSH Mining Research Program (2005 – 2007) and was a member of the NAS Committee on Coal Policy (2005 – 2007). He served on the NRC/TRB Committee on Offshore Oil and Gas Platform Inspection Program of the Mineral Management Service: A Review (2009 – 2012) and on the NAS Committee on the Study of the Respirable Coal Mine Dust Exposure in Underground Mines (2016 – 2018). He has served as a reviewer of several NRC committee reports, NIOSH research reports and reports of other expert panels. He was a member of the first ever Department of Interior's Advisory Board to the Director of U.S. Bureau of Mines (1995). He was appointed Chairman of the Governor’s Commission on Abandoned Mine Voids and Mine Safety by Governor Schweiker (2002) to recommend means to prevent Quecreek-type mine inundation accidents.  At Penn State, he is active in the Global Education Network [GEN] program, particularly with the initiatives in Africa and India. Ever since 2004, he has been involved with the development of mining education in the African Sub-Sahara, in Ghana, Mali and Nigeria.

Dr. Ramani’s contributions to mineral engineering have been widely acknowledged with awards from academia and technical and professional societies.  Dr. Ramani is the recipient of the Distinguished Alumni Award of the Indian School of Mines (1978), SME Book Publications Award (1981), JSPS (Japan) Eminent Scientist Fellowship Award (1983) and Fulbright Scholar Award to Soviet Union (1989-1990).  In 1989, he was elected a Distinguished Member of SME and was awarded the APCOM Distinguished Achievement Award for outstanding contributions to the application of computers and operations research in the mineral industry.  The first recipient (1986) of the Educational Excellence Award of the Pittsburgh Coal Mining Institute of America [PCMIA] for his teaching and research on underground coal mine health and safety, in 1987, he was recognized by the College of Earth and Mineral Sciences, The Pennsylvania State University, with the student nominated Matthew J. and Anne C. Wilson Outstanding Teaching Award.  Dr. Ramani was awarded the 1990 Environmental Conservation Award of the American Institute of Mining, Metallurgical, and Petroleum Engineers (AIME) for his distinguished contributions to the environmental planning and designing of mineral operations.  In 1991, Dr. Ramani received the Howard N. Eavenson Award from SME for his contributions to the advancement of coal mining through research, innovation, and engineering education.  In 1992, he was awarded The Percy W. Nicholls Award (Joint Society Award) of the American Society of Mechanical Engineers and the American Institute of Mining, Metallurgy and Petroleum Engineers for extensive contributions to the health, safety and productivity in the coal mining and processing.  In 1993, Dr. Ramani was awarded the Robert Stefanko Best Paper Award for a paper on the "Outlook for Low Sulfur Coal Supply in Central Appalachia," and the Distinguished Service Award of the Coal Division for his contributions to the coal mining industry, both from SME.  In 1994, he was named a Henry Krumb Lecturer by AIME and delivered lectures at a number of SME/AIME Sections on two topics: "Mineral Engineering Education Needs for the 21st Century," and the "Meaning of Sustainable Development for the Mineral Industry." Dr. Ramani was also recognized in 1994 with the Outstanding Asian American Award by the DOE’s Pittsburgh Energy Technology Center and the Bruceton Asian American Group for his international mining and leadership achievements.  In 1997, Dr. Ramani was awarded the Doctor of Science degree (honoris causa) by Indian School of Mines.  Also in 1997, at the 6th International Mine Ventilation Congress, he received the Howard L. Hartman Mine Ventilation award from SME for outstanding service to the field of mine ventilation.  He is the recipient of the 1999 AIME Mineral Industry Education Award for his contributions as an educator and research scholar, and his dedication to the betterment and enrichment of the mining profession. Also, in 1999, he received the APCOM Chairman’s Award for his outstanding contributions to education and APCOM.  In 2000, he received the Thornton Medal from the Institution of Mining and Metallurgy (London, U.K.) for his keynote address and paper on the "Environmental Planning in the Mineral Industry."  In 2003, he received the Robert Stefanko Distinguished Achievement Award in Mineral Engineering from the Energy and Geo-Environmental Engineering Department at Penn State.  He is the 2005 recipient of the AIME’s Erskine Ramsay Medal Award for his professional service to the coal mining industry as an outstanding educator and researcher.  In 2005, he was elected to the National Academy of Engineering in recognition of his contributions to the miners’ safety through increasing the understanding of the behavior of particulates in mine atmosphere. In 2006, he was awarded the College of Earth and Mineral Sciences’ Charles L. Hosler Alumni Scholar Medal for his contributions to the College, University and Profession. In 2009, Ramani was awarded the 2008 SME President's Citation to acknowledge the value of his work to the advancement of the engineering profession. In 2010, he received the AIME Honorary Member Award for his contributions to mining engineering education and practice, his research to improve health and safety and his more than 40 years of distinguished service to SME and AIME. In 2012, he received the Basant Sammelan award [Distinguished Alumni Award] from the Indian School of Mines Alumni Association [ISMAA]. In 2013, he received the PCMIA’s Donald Kingery Memorial Award for his contributions to the health and safety of the miners.  In 2013, he also received Prof. S.K. Bose Memorial Award for Excellence in Teaching Mining Engineering from the Mining, Geological and Metallurgical Institute of India [MGMI].  In 2014, he was awarded a Fulbright Distinguished Chair [Fulbright-Nehru Chair] to lecture on the subject of “Mining, Energy, Climate Change and Sustainable Development” at the Indian Institute of Technology, Kharagpur, India. In 2015, at the 37th APCOM Symposium, he received the APCOM Pioneer Award for his technical and leadership contributions to computer applications in mining and the Symposia series. In 2017, he received the SME’s Ivan B. Rahn Education Award for his extraordinary dedication, outstanding leadership and significant contributions to the professional registration of mining and mineral engineers.

Dr. Ramani has served as a visiting professor at several universities in the U.S. and abroad, and as a keynote speaker at national and international meetings on ventilation, computers, systems analyses, health, safety and environment, and mineral education, the most recent one being the 11th International Mine Ventilation Congress in Xian, China in 2018.  He is listed in several international biographical listings including Who's Who in the World, and Who's Who in America.