Penn State has extended the remote-delivery period for all classes through at least the spring semester. Select the "more info" link to keep up with the latest from Penn State about the global coronavirus outbreak. MORE INFO >>

The Shoemaker Lectures are meant to bring outstanding leaders of the energy and mineral resource industries to the Penn State University Park Campus to discuss with students and faculty issues of critical importance to the mineral industry. The inaugural Shoemaker Lecture was presented on April 3, 1992 by B. R. Brown, chairman of the board, president and chief executive officer of Consolidation Coal Company.

Unfortunately, ongoing health and safety concerns have made it necessary to cancel the 2020 G. Albert Shoemaker Lecture. 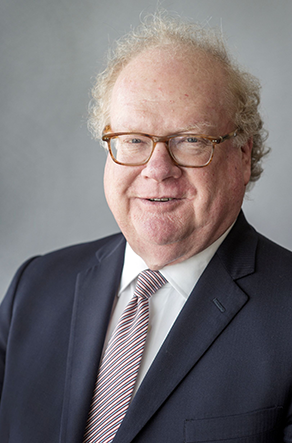 ABSTRACT: We are squarely in the Fourth Industrial Revolution and ushering in the “Age of the Operator.” In search of competitive advantage, large-scale, open-pit mining is increasingly leveraging data analytics and the Internet of Things to drive efficiency and productivity across the business. Digital tools are not aiming to eliminate operators but rather “turbo-charge” them – changing their role from an executor of repetitive tasks to an explorer, seeking out insights that enable improved business decisions and capital efficiency. Freeport-McMoRan is on the bleeding edge of this trend, and these AI tools already are providing an additional 15 percent capacity increase at our concentrating plants, improving equipment life cycles, driving down costs and greenhouse gas emissions, and improving safety performance. Data is the new currency and Freeport-McMoRan is leading the way.

Harry M. (Red) Conger is President and Chief Operating Officer - Americas, and is responsible for
management of the company’s North and South America copper mining operations and Climax
Molybdenum Co. This includes nine mining operations in North America, two in South America, and
the associated downstream processing facilities. These operations employ more than 16,000 people
and have annual copper production of 2.7 billion pounds and annual molybdenum production of 95
million pounds from mines operated by Freeport-McMoRan. He also has environmental and
corporate social leadership responsibilities in North and South America.

Mr. Conger began his career at the Kennecott copper mine at Bingham Canyon in Utah in 1977,
which led to a 20-year career with Phelps Dodge Corporation overseeing all aspects of mining and
processing at several North America operations and all South America operations. During that time,
he progressed through a multitude of senior management roles of increasing responsibility before
becoming president of Freeport-McMoRan Americas in 2007, following Freeport-McMoRan’s
acquisition of Phelps Dodge that same year. He assumed the role of president and chief operating officer in July 2015.

Throughout his career, Mr. Conger has been recognized for his leadership in safety and is
considered a leader in change management and production efficiency. He served as chairman of
the National Mining Association 2014-2015, where he has been a member of the Executive
Committee since 2007. He also served as co-chairman of the initiative Creating Global Prosperity:
The Campaign for Mining, launched by the Society for Mining, Metallurgy and Exploration.

Mr. Conger was elected to the National Academy of Engineering in 2019. In 2018, he was named
the Ankh Award Winner and Copper Man of the Year for his leadership in promoting improvements
in workforce safety and building strong collaborative relationships with local communities. In 2017,
Mr. Conger received the Charles F. Rand Memorial Gold Medal in recognition of his leadership in
safety, change management and production efficiency and for his contributions to SME. In 2016, Mr.
Conger was selected the William N. Poundstone Lecturer by the Benjamin M. Statler College of
Engineering and Mineral Resources at West Virginia University. In 2009, Mr. Conger received the
Daniel C. Jackling Award for his significant contributions to technical progress in mining and in 2007
was the recipient of the Colorado School of Mines Distinguished Achievement Medal. Mr. Conger is
a former commissioner on the New Mexico mining commission, and served on an Arizona water
review commission.

Mr. Conger received his bachelor of science in mining engineering from Colorado School of Mines.
He has completed post-graduate executive management studies at Duke University Fuqua School
of Business, and Whitmore School of Business and Economics at the University of New Hampshire.

He and his wife Sissy have four children and reside in Phoenix, Arizona.

The G. Albert Shoemaker Lecture Series in Mineral Engineering was established in 1992 by Mercedes G. Shoemaker to honor the memory of her husband, a Pittsburgh civic and industrial leader dedicated to the support of higher education. G. Albert Shoemaker graduated from Penn State in 1923 with a bachelor’s degree in Mechanical Engineering and went on to lead an eminent career in the mineral industries. After working as an engineer with Babcock and Wilcox, he joined Pittsburgh Coal Company, a predecessor of CONSOL Energy, where he worked for 35 years, retiring as president of the company in 1966. After retirement he continued to consult with a number of companies developing interests in coal. Al engaged in many civic and philanthropic activities including serving on the boards of several corporate and non-profit organizations. He was elected a Distinguished Alumnus of Penn State and served on the Board of the Penn State Foundation for ten years and as a member of the University Board of Trustees for over twenty years, from 1957 to 1978, and as board president from 1970-73.