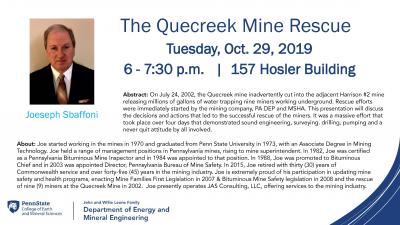 Join us for a special presentation by Joseph "Joe" Sbaffoni on the Quecreek Mine Rescue on Tuesday, Oct. 29 from 6-7:30 p.m. in 157 Hosler Building.

Abstract: On July 24, 2002, the Quecreekmine inadvertently cut into the adjacent Harrison #2 mine releasing millions of gallons of water trapping nine miners working underground. Rescue efforts were immediately started by the mining company, PA DEP and MSHA. This presentation will discuss the decisions and actions that led to the successful rescue of the miners. It was a massive effort that took place over four days that demonstrated sound engineering, surveying. drilling, pumping and a never quit attitude by all involved.

About Joe Sbaffoni: Joe started working in the mines in 1970 and graduated from Penn State University in 1973, with an Associate Degree in Mining Technology. Joe held a range of management positions in Pennsylvania mines, rising to mine superintendent. In 1982, Joe was certified as a Pennsylvania Bituminous Mine Inspector and in 1984 was appointed to that position. In 1988, Joe was promoted to Bituminous Chief and in 2003 was appointed Director, Pennsylvania Bureau of Mine Safety. In 2015, Joe retired with thirty (30) years of Commonwealth service and over forty-five (45) years in the mining industry. Joe is extremely proud of his participation in updating mine safety and health programs, enacting Mine Families First Legislation in 2007 & Bituminous Mine Safety legislation in 2008 andthe rescue of nine (9) miners at the QuecreekMine in 2002. Joe presently operates JAS Consulting, LLC, offering services to the mining industry.

We hope to see you there!