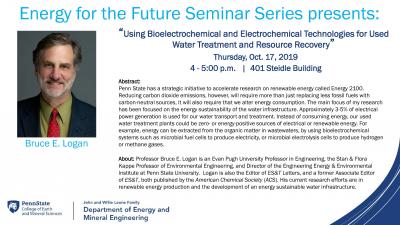 Abstract:
Penn State has a strategic initiative to accelerate research on renewable energy called Energy 2100. Reducing carbon dioxide emissions, however, will require more than just replacing less fossil fuels with carbon-neutral sources, it will also require that we alter energy consumption. The main focusof my research has been focused on the energy sustainability of the water infrastructure. Approximately 3-5% of electrical power generation is used for our water transport and treatment. Instead of consuming energy, our used water treatment plants could be zero-or energy-positive sources of electrical or renewable energy. For example, energy can be extracted from the organic matter in wastewaters, by using bioelectrochemicalsystems such as microbial fuel cells to produce electricity, or microbial electrolysis cells to produce hydrogen or methane gases.

About: Professor Bruce E. Logan is an Evan Pugh University Professor in Engineering, the Stan & Flora KappeProfessor of Environmental Engineering, and Director of the Engineering Energy & Environmental Institute at Penn State University. Logan is also the Editor of ES&TLetters, and a former Associate Editor of ES&T, both published by the American Chemical Society(ACS). His current research efforts are in renewable energy production and the development of an energy sustainable water infrastructure.