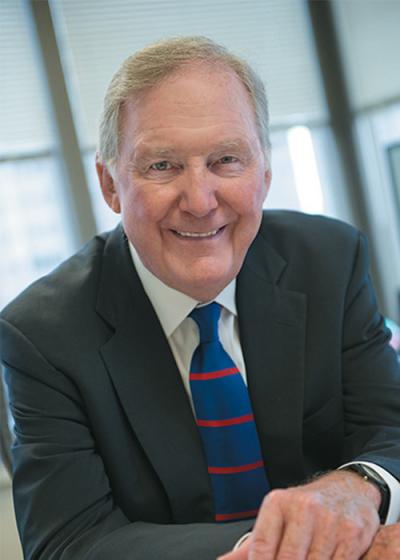 Abstract: In this seminar the speaker will summarize the impact that greenhouse gas emissions have on the earth’s climate and the major transitions that must take place in both energy demand/supply and CO2 capture to meet a carbon net-zero target by 2050. DNV’s projections for the world and for China, Europe and North America will be used to illustrate the transition. During the discussion the speaker will ask the audience to suggest how the university curricula could change to meet the needs of those energy specialists who will drive the necessary transitions.

Bio: Dr. David A.T. Donohue is a noted technical specialist, project developer, businessman, attorney and lecturer. He is the Founder and President of both IHRDC and the Arlington Group. Both organizations have their head offices in Boston: IHRDC provides training solutions for the international energy industry; the Arlington Group formed groups to explore for natural gas and develop underground gas storage fields in the United States.

He began his career working in various phases of petroleum operations, engineering and research for Imperial Oil, ExxonMobil and Gulf Oil Companies in Canada and the United States before joining the faculty at the Pennsylvania State where he taught Petroleum and Natural Gas Engineering for four years (1964-68) before entering law school.

At Pennsylvania State University and later for IHRDC he has lectured on such technology topics as reservoir mechanics, computer technology, underground gas storage, energy economics, and, later, he extended his teaching and e-Learning publications to the commercial aspects of the oil,  gas and power business:  legal, financial, markets, regulation and project management throughout the oil and gas value chain.

He founded IHRDC in 1968 while in Law School and developed it into a world leader in integrated oil and gas training and personnel development – from operations to management and executive programs. Over the past 30 years (1988- present) he has developed and taught a variety of oil, gas and power business fundamentals programs to more than 15,000 worldwide energy industry managers and executives. These widely-used management programs are known for the unique Learning Simulation Games that he originated to enhance learning and create an enjoyable experience.

He led the industry-sponsored development of the 115 module Video Library for E&P Specialists (1982-94) which was converted (1994-Present) into an innovative  and widely-used, web-based technical knowledge and learning systems (IPIMS) for the upstream petroleum sectors. He is currently Senior Editor and author of Petroleum Online, a 14-module e-Learning series devoted to the International Oil and Gas Business. These productions have received 34 Telly Awards for excellence in production. Today the company has over 1200 e-Learning courses devoted to the integrated learning needs of the industry.

His early work in preparing Manpower Development Studies for international clients has been transformed by others within IHRDC, notably Brad Donohue, to become an industry-leading Competency Management System used by many companies and organizations today to build world-class personnel. It was selected by the Society of Petroleum Engineers (SPE) and Society of Exploration Geophysicists (SEG) as the foundation system for their members.

Dr. Donohue formed the Arlington Group in the late-70’s to explore for oil and gas and develop underground gas storage fields in association with a small group of East Coast gas distribution companies. In 1975 he successfully developed the first independent underground gas storage field in the United States, the Honeoye Storage Field near Rochester, NY, and, in 1991, added the Adrian Project, a second storage facility, in Steuben County, New York State to the Arlington portfolio. These facilities continue to be used by many Northeast gas distribution and marketing companies to provide gas in the winter months to residential and commercial customers.  In 2007 he sold his interests in these major entities but remained President of Honeoye Storage Corporation until 2018.

He is a past recipient of the Cedric Ferguson Award of the Society of Petroleum Engineers, was an SPE Distinguished Lecturer during 1990-91, was elected a SPE Distinguished Member in 1987 and received the AIME’s Charles F Rand Memorial Gold Medal in 2016. The Pennsylvania State University recognized him as an Alumni Fellow in 1999 and the College of Earth and Mineral Sciences awarded him with the Distinguished Achievement Award in 2003. In 2009 he received the William Kenealy SJ Alumnus of the Year Award from Boston College Law School.

Dr. Donohue is also active in the local affairs of his hometown of Wellesley, MA. He was a member of the Town Advisory Committee from 1988-92 (Chairman in 1992), an elected member and periodic Chairman of the Board of Public Works (1993-present), and a member and periodic Chairman of the Board of the Wellesley Municipal Light Plant (1993-present).  He also served on the Board of Overseers of the Boston College Law School (2006-2012), and the Dean’s Advisory Board (2014-Present). He has been a loyal volunteer and philanthropist of the College of Earth and Mineral Sciences at Penn State for decades. Dr. Donohue is also a current member of the Penn State EME External Advisory Board.

Dr. Donohue is married to Pamela (Sandlund), a graduate of the Yale-New Haven School of Nursing, who rose to Supervisor and Senior Instructor at the Peter Bent Brigham Hospital in Boston before retiring to raise their four grown children: Theresa (BA, MEd), Timothy (MS, EMS ’91), Kimberly (BA, MA) and Bradford (BS, MBA). The latter three children are Vice Presidents of IHRDC. David and Pamela have nine grandchildren.